Strange views of the poles

The satellite patterns of the satellites avoiding the poles
What does NASA say :
"The circular gap over the Earth's geographic pole
is due to a gap in the satellite coverage." 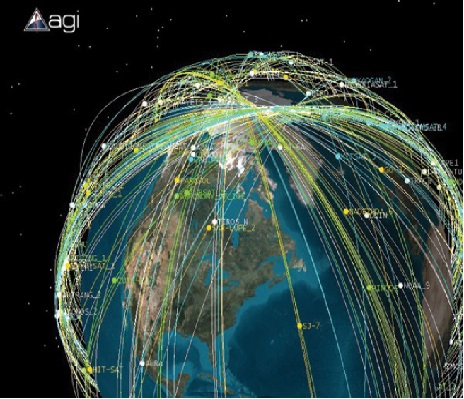 That composite picture of the North Pole taken the 23 Nov. 1968 was published for the first time in June 1970 in Ray Palmer magazine "Flying Saucer" a clear-circular-gigantic-hole appears at the North Pole...why has this part been removed from the picture??...Perhaps somebody could give me a reasonable answer that makes sense?...i guess that  at that time, they didn`t have yet, sufficient imagery technology to fill the gap decently, like it could be easily done nowadays with "Photoshop". 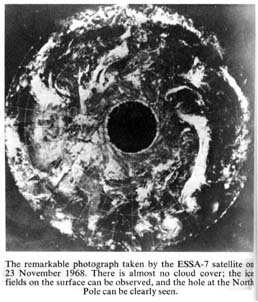 This composite picture is another NASA document created by Drs David S. Johnson of "National environment Satellite Center" from several shots done by ESSA satellite in April 1967.
AGAIN A PART HAS BEEN REMOVED...which hides the Pole entrance???... 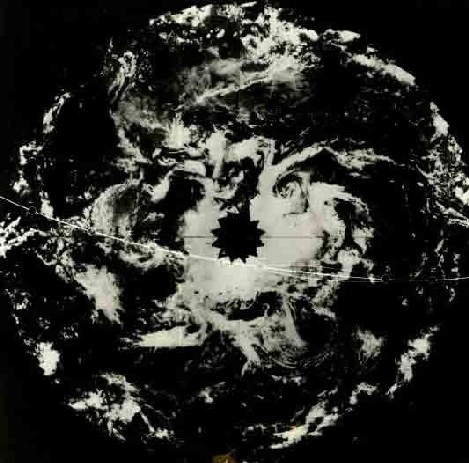 Another composite photography of the North Pole taken by the ESSA-3 satellite in January 6, 1967. It shows what seems to be an inward motion of the clouds?...i guess that the rest of the North Pole area has been removed. 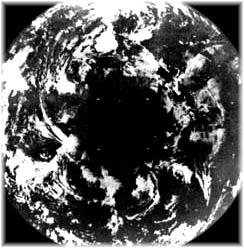 Note: All the photographies of the North Pole taken above show clearly that they are composite pictures done through several shots since the entire hemisphere is bathed in sunlight, but why are the lines radiating from the Equator up to the North Pole never ending their course at the very top? For the ESSA-3 picture, it makes sense since in January the North Pole is plunged in total darkness however i can`t explain the clouds inward motion? Those pictures are not absolute proof of a massive hole! but they do fail some explanations.
Photographic image of the North Pole "entrance"
from "the nineteenth mission of Columbia"
United States Space Shuttle mission  STS-75
between the 22 February  & 09 March 1996 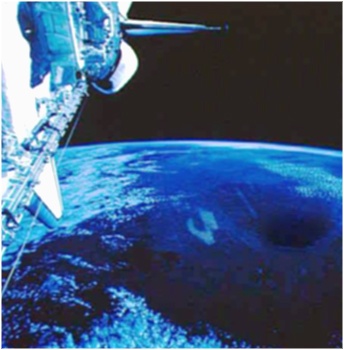 The latest pictures provided by an infrared satellite show that the heat signature at the North Pole is quite astounding???... 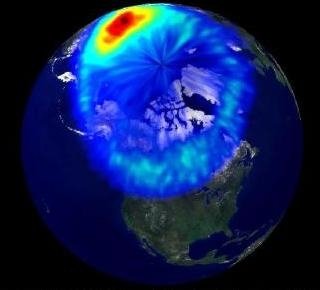 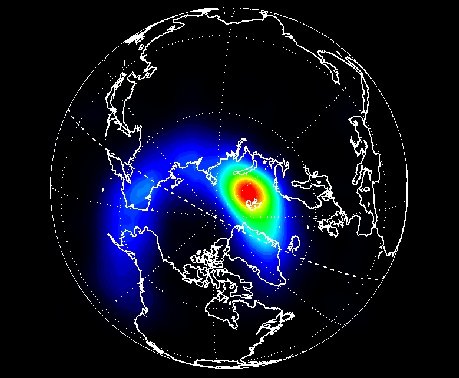 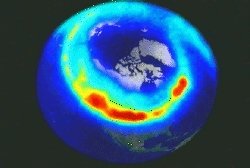 Dual Auroras prove that the sun wind is NOT the cause of it! 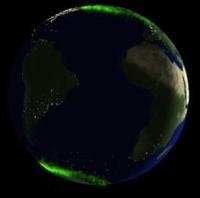 After the North Pole let`s have a look at this amazing shot of the SOUTH POLE from the Environmental Research Institute of Michigan, this one is particularly interesting since it provides a great view of the internal light! 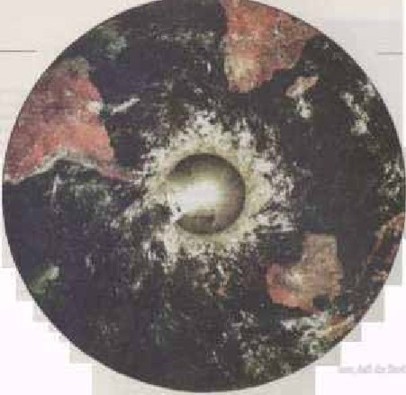 For many years, i thought that the amazing picture shown below was a  space shot of the South Pole which according to several sources seems to be a real one!! At least the details are astounding! however i got misleaded by the fact that it does fit the 3D radar pictures of the European ESR . Through further researches it turns out that this footage is a view of the North Pole transmitted by the American Meteorogical satellite ESSA-7 in 1968. 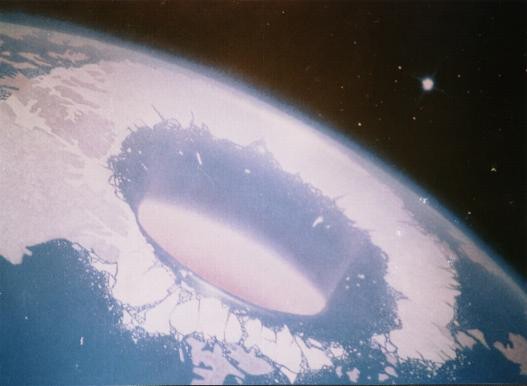 These 3D radar pictures of Antarctica "South Pole" were provided by the European ESR satellite in 1992. they give  a clue of the enormous gap in the  South Pole which is 1/3 of the continent and swallows almost all the eighteeth  parallel of the southern hemisphere "Ross Dependency", therefore all the chains of mountains which are including: Royal society, Worcester, Britannia,Churchill, Queen  Elizabeth, Queen Alexandra, Common Wealth, Queen Maud and Wisconsin are pushed over against Queen Maud land and are therefore 870 miles away from what is shown on the official maps!! However the pictures produced by ESR-1 are showing (officialy) the ice land contours up to 81.5 degrees of south latitude therefore it is reasonnable to assume that the hole shown on the three pictures result from the lack of coverage of the satellite...

A picture showing the hole in the ozone layer over the South Pole
Why this inward motion??? Which by the way fits the 3D radar pictures shown above 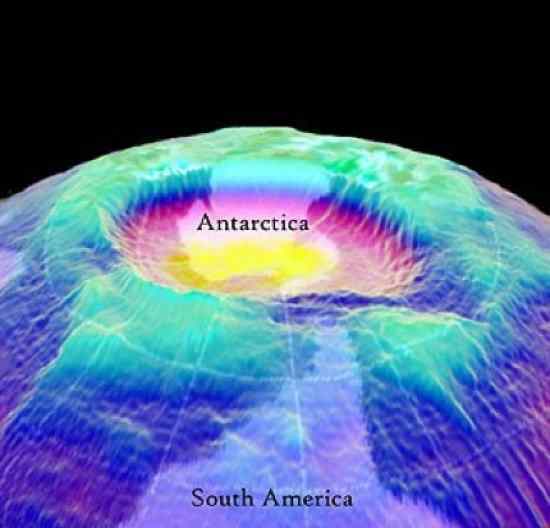 In March 1960, the very much in depht and popular French science magazine "science et vie," published a very interesting article of the South Pole area nearby the Ross sea. It says that Russian scientists explored the "BENGUER " oasis, an area of 500KM2 free of ice (displaying an average temperature of more than  25°Celsius??...) with lakes, springs, vegetation and several bird species...For such an incredible phenomenon, the magazine says that the scientists found out the reason of that sudden rise of temperature, which is due to the fact that in the South, mountains are breaking down the wind and holding a huge amount of ice and snow and in the North the ocean has a softening effect? How could these scientists let us believe that a mountain range and the softening effect of the ocean can explain a difference of more than 100°Celsius! (that`s boiling water!) since the article says that the lower temperature surrounding the area has reached a phenomenal record of  minus 86.7° Celsius and displays an average of minus 50° Celsius.
Click on the picture to view the article

If you can not read a pdf file, "click here to download the latest of Adobe reader" 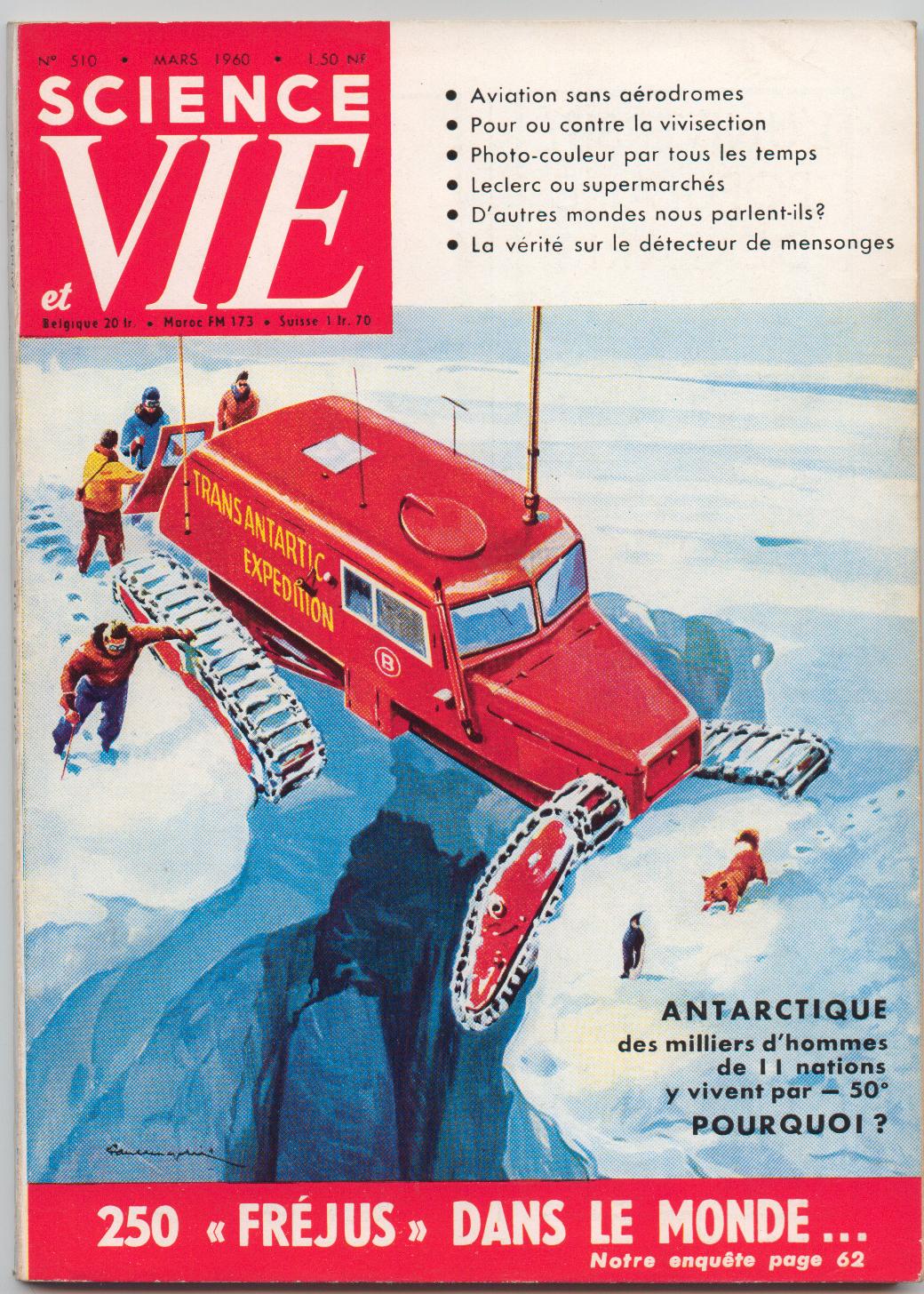 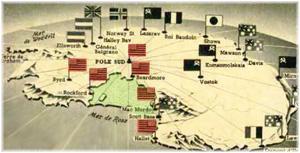 how does an official space view of the poles
look like?
this is a lovely over-retouched official view of the Arctic by
CLEMENTINE SATELLITE (thanks to Photoshop) 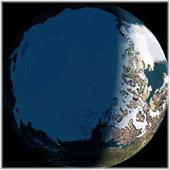